Home / Review / Meditations on the Mother Tongue: A Review An Tran’s debut collection Meditations on the Mother Tongue (C&R Press, 2017) is composed of twelve stories. The setting stretches from Sumatra, to the mainland United States, to Alaska. Concerned with transcending generic boundaries as well as geographic borders, the stories range from supernatural, to starkly realist, to mythopoetic. The title—Meditations on the Mother Tongue—suggests that An Tran has put together a series of linguistically-complex and language-focused stories; a set of stories whose plots hinge on their protagonists’ abilities to form, re-form, and play with words. But in fact, the beautiful moments of this collection exist somewhere between the words—and between worlds. Tran says as much through his characters’ silences and missed connections as he does through their intellectual ponderings.

In the story from which the collection takes its title, Bao rents a documentary, Parkour: Generations, and watches in awe as one of the founders of parkour speaks to his family in Vietnamese. Bao’s passion for the practice ultimately inspires him to re-learn the Vietnamese that he has forgotten as a young adult. The story takes place in three chronologically distinct sections, tracking Bao’s development from a child, to young adult, and finally to a married man. The plotting of the story is slow, and very little happens. Yet, what Tran has aptly called “meditations” on what cannot be revealed through language form a complex story about familial alienation. In his Vietnamese class, Bao learns that “the words for ‘mother’ and ‘ghost’ were distinguished only through pitch,” and he teaches his classmate Tara that there is no Vietnamese word for ‘blue’: “Blue just doesn’t exist.” The gaps in the language mirror Bao’s own difficulty in connecting with his mother as she deals with dementia later in their lives. Bao, in many ways, has always known his mother as a ghost. As a child, he had “tried not to bother Ma when she [was] home from work,” and instead spent his time watching for the mysterious “Blue Lady,” an apparition he and his brother Phuc often see occupying the halls of their childhood home, and who seems to have sprung from their collective desire for a mother who can relate with their American identities. The Blue Lady, of course, cannot exist either in an embodied form or even linguistically, for she is impossible to articulate in their native language. Phuc suggest that she exists only to children, because “kids are more sensitive to ghosts.” Within the almost imperceptible gap between the words for “ghost” and “mother” exists Bao’s relationship with his mother; it is a slippery grasping for home, safety, and identity whose fulfillment was always impossible.

Tran’s overall concern with the difficulty of communicating across differences (say, of generation or of language, as in the title story) is taken to a new, and much larger, scale in many of his stories. The collection is at its best when it explores communication across worlds. “A Clear Sky Above the Clouds” takes the reader to Sumatra, where thirteen-year-old Teuku leads a group of American scientists into a cave to search for hairy-nosed otters, a species that was thought not to have existed on the island for a century. Though the story does feature an action-packed natural disaster, the real conflict of the tale again takes place in what is not quite articulated. While the flood scene feels predictable, Teuku’s relationship with the foreign scientists is a more nuanced and captivating kind of natural disaster. Discussing lead scientist and noted “bossy” introvert Abbey, Teuku and another scientist, Fred, come to a standstill. When Fred finishes only with “How interesting,” Teuku thinks, “the letters of Fred’s words are a walk down a mountain path…there should be more letters, more words, as the path abruptly breaks to a steep drop. Across the gap must be more letters, but they are distant and blurry.” Teuku cannot fathom “the thoughts Fred traps within his own skull.” At the end of the story, the reader is given a privileged glimpse into what neither Teuku nor Abbey can see: the raft of otters that has existed there since the “ancient moment in planetary incubation carved the flatness…that would form the river that would house the otters.” Unknown to the story’s human characters, an entire world—and another story—exists. 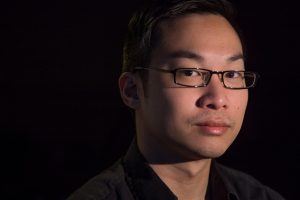 The non-communicability across human and otter communities may suggest that gaps in understanding are impossible to overcome. Yet, in the collection’s most moving story, “Conversations with the Rest of the World,” Tran takes a more ambivalent stance. Lily learns, between the ages of three and about seven, several things about sound. Sitting at the breakfast table with her tired and angry parents one morning, she learns that “silence was a punishment.” Though her parents avoid one another’s eyes and remain tight-lipped, the “vibrations” and “quick strong, rapid booms” that had echoed through the floor boards the previous night tell Lily—and the reader—more than the adults might have been willing or able to articulate. Lily may be, as her father tells a stranger, his “deaf daughter;” but in the story she is shown to be uniquely able to communicate with the nonhuman world as she signs with the young gorillas in the zoo. Unlike her father, who avows that the gorillas “can’t actually communicate,” Lily knows that they are “trying desperately to be understood.” She imagines herself “ripping away all the invisible railings of the world, all the barriers to speaking up,” even as she is painfully aware of the “vast lacuna” between herself and her father.

Tran’s focus on the gaps in communication prompt us to ask: What are we, as readers, not hearing from these characters whose minds are often closed to us? What are we not seeing in these brief glimpses into worlds? The stories’ abrupt endings and unexplained supernatural phenomena—coupled with the many characters whose backgrounds and interior thoughts remain hidden—might not please everyone. In “Flying Objects,” Roy tells Victor that divorce is like “watching a movie at home during a lightning storm. You get invested, absorbed; you forget yourself. Then the power goes out. The screen is black and the lights are off, the story ends. You still want to know how it ends.” Many readers may feel as frustrated as Victor when he realizes that, “All I will see is black.” Or, indeed, as frustrated as Tom in “The Message of My Skin,” whose story ends with his realization that “There is nothing there for me to read.” But as Tran’s stories insist, the real complexity, delight, and even sorrow flows from what is not said or written; in what goes unsaid between husbands and wives; between cultures; between family members; and – perhaps most beautifully—between humans and nonhumans.