Rather than proposing solutions, Ursula K. Le Guin’s novels ask questions. To enter into one of her storyworlds is to bear witness to a theoretical experiment. What would a planet without fixed genders look like? See The Left Hand of Darkness. How would pure anarchism evolve in the movement from idea to praxis? The Dispossessed. Why are we drawn to naive solutions for systemic problems, and in what ways are these fantasies dangerous? The Lathe of Heaven. In this pattern, Le Guin avoids telling us what to think in favor of showing us how to think for ourselves.

This isn’t to say that Le Guin never spoke her mind; she was unapologetically opinionated, but her opinions tended to be process-oriented. In The Left Hand of Darkness, for example, she writes, “To learn which questions are unanswerable, and not to answer them: this skill is most needful in times of stress and darkness.” In a later essay, “Living in a Work of Art,” she explains how such a perspective informs her non-fiction: “When I can use prose as I do in writing stories as a direct means or form of thinking […] not as a vehicle for a message, but as an exploration, a voyage of discovery resulting in something I didn’t know before I wrote it, then I feel that I am using it properly.” In both cases, she deemphasizes the virtues of knowledge in favor of those of investigation.

Le Guin honed the values and practices that animate her work over the course of her long life and rich career, which is what makes Ursula K. Le Guin: Conversations on Writing so special. The book, which came out from Tin House Books in April 2018, features a series of interviews between Le Guin and writer and radio show host David Naimon. It was Le Guin’s last collaboration, in edits when she died on January 22, 2018, making this book the final repository for the accumulated wisdom and talent responsible for Le Guin’s enduring legacy.

Like all of Le Guin’s work, Conversations transcends narrow considerations of genre. More than a set of interviews, the book is also part treatise, part writing guide, and, perhaps unsurprisingly, part hagiography. Beyond the real affection between Naimon and Le Guin, made palpable by their ease of conversational flow, Le Guin’s recent death imbues the book with tender gravity. Her words reverberate not simply as advice passed down from the uncompromising foremother of contemporary science fiction, but also as a strange admixture of dream and prophesy. These were her ultimate musings, her parting hot takes, her posthumous instructions for those of us eager to carry her project forward. Reflecting on his conversations with Le Guin, Naimon recalls learning from her “that the length of our sentences, their gait, their sound, that our use of tense, of point of view, of pronouns, all have their histories, their stories, their political and cultural implications, and each could be a building block, a concrete gesture, for good or for ill, toward an imagined future world.” 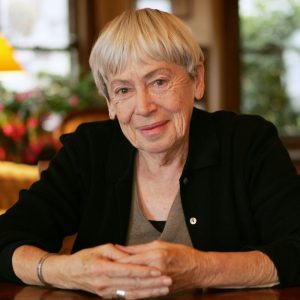 Befitting its status as Le Guin’s final publication, the book is also a beautiful object unto itself. Small and sleek, with a turquoise inlay bearing Le Guin’s signature, Conversations feels as though it belongs on display—on hand so we will pick it up to revisit its contents regularly. When we do, we’ll find the effortless summation of her elegant philosophy, made deceptively accessible by the conversational format, which drifts across three broad topics—fiction, poetry, and non-fiction—and is interspersed with salient excerpts from Le Guin’s work and works that inspired her.

Each chapter features Naimon’s thoughtful introduction, which interweaves personal remembrances with keen analyses, delivering what seems to be as close to her perspective on her own work as possible. Speaking, for example, of a hiking trip to a location Le Guin recommended as being “one of the only places left in the United States where you can experience true darkness,” Naimon reflects: “when I think of Ursula’s poetry it’s this, these unadulterated skies and the people who generation after generation have lived beneath them… If imagination is the word that comes first to mind about her fiction, contemplation is the word I’d most associate with her poetry.”

Le Guin may be best known for her work as a novelist, but the book—her final literary act—gives equal space to her poetry and non-fiction because no mode can be understood in isolation. Her fiction is philosophical and her philosophy valorizes fiction; her prose is as poetic as her poetry is political. In her conversation on poetry, for example, she reminds us, “dictators are always afraid of poets.” While speaking of literary criticism, she emphasizes, “You can’t reduce a novel or poem to an intelligible single meaning.” In the end, Conversations provides a roadmap for thinking beyond survival in this dark era. It shows us how to use words to build worlds.

A little more than three years before her death, Le Guin made headlines at the 65th National Book Awards. Upon being awarded the National Book Foundation’s Medal for Distinguished Contribution to American Letters, she delivered an incendiary six-minute speech. “I think hard times are coming,” she prophesied, “when we will be wanting the voices of writers who can see alternatives to how we live now. […] We will need writers who can remember freedom — poets, visionaries, the realists of a larger reality.” Looking at her work, we can see the gifts she left us — societies we couldn’t have imagined without her, poems to force us to contemplate our place in this rich and thickly textured world, suggestions about how to position ourselves politically through the work of art and art of work. With this book, she also leaves us a guide to refashion ourselves as the visionaries, poets, and realists of a larger reality she wanted for us.