Rachel Mennies’ The Naomi Letters opens with a question, an invitation to devotion: “The love poets say suffering is relative, but would they pull a plane whole / from the sky?”

The Naomi Letters is a compilation of sent and unsent messages to the speaker’s beloved subject, Naomi. It refreshes the epistolary structure, presenting readers with cuttingly honest and even brutal moments of heartache that leave us as intrigued and as wounded as the speaker as she searches her letters for hidden meanings. Mennies employs a clever layering of confession upon confession that serves to mask the urgency of the speaker’s reveals (her feelings for Naomi, her bisexuality, her suicidal ideation), presenting not a gateway around these heavy topics but one that rips right through them. The Naomi Letters pulls readers in with its immediate introduction to Mennies’ speaker, Naomi, and the speaker’s own trials in navigating the communication between these subjects; the collection’s structure functions as a timeline that not only allows for a practical and imperative understanding of the passage of time between each letter but also catalogues the emotional evolution and growing relationship between the two women as it begins. From July 10, 2016, to March 27, 2018, Mennies relays her narrative within the set span of nearly two years.

Mennies explores the speaker’s desperate desire to be known. The Naomi Letters tracks the speaker’s journey into self-discovery—depicting a final healing between body and mind. Reading these poems—experiencing Mennies’ vivid images of devotion and brilliantly composed self-realizations—is an exercise in voyeurism, an intimate glimpse into the privacy of the speaker’s mind. We, like Naomi, are asked called to witness: “Instead of forgive me, Naomi, I will try to ask you to listen.”

Mennies’ speaker, the ever-present “I” in each poem, has a unique and complex voice, one that balances repression and recollection of the past as she looks toward the future. Paradoxically careful to preserve the speaker’s selfhood and to pry her open, Mennies writes the letters as if the speaker’s self-discoveries are just as new to her as they are to Naomi, revelations bleeding across the page and into love letters:

I told someone about you, Naomi.
She asked me are you writing her love letters?
(The rest of my mail: bills, coupons, catalogs, the sweaters I buy online.)
I answered my friend: I don’t know what to call them.
I gave her a piece of truth as the whole, the simplest kind of lie.

To speak to Naomi, for the speaker, is to proceed through her initial anxieties, her wavering self-permission. The speaker’s confidence grows as she persists in her conversation with Naomi. Yet, with each subsequent letter between the two women, the reader can see that a language is being formed: a quiet and steadily growing love between two women then condensed into the space of a name, an address––“Naomi.” It is a declaration as much as it is a whisper. 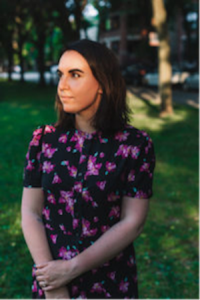 “I have so much more to tell you about being alive,” Mennies’ speaker says, ending her first letter to Naomi. Attempting to balance her fascination with Naomi with her own struggles, the speaker creates a blurred line between personal desire and self-assurance, having initially separated her own desires and her own body from herself: “How do I dress the body I will not meet? How do I dress the  body / I cannot love.” The speaker’s desire for Naomi allows her to regain agency over her own self and body. Her desire for Naomi provides a pathway into self-exploration––one she is both wary of and invigorated by: “Everything inside of me has changed, and everything outside of me / has changed.”The speaker explains life not only as she has come to know it but learned to love it– a task not easily accomplished: “This year I must add I tried to die to the list and listen as the one god / writes it down.” The speaker’s vulnerability is as hypnotic as it is intense.

What we learn of Naomi is the speaker’s own comprehension of her––a reconstructed rose-gold gaze through which the speaker evaluates herself. Naomi is not her savior, but she presents a pathway to self-knowledge. Over the course of the collection, the speaker learns to envision herself and, thus, to grow outside of the scope of Naomi and her imagined expectations. At the beginning of the collection, the speaker presents herself as someone potentially capable of fitting into Naomi’s perception of her: an image the speaker is careful to create and control. However, as the collection goes on, the speaker’s voice and the poem evolve to reflect the growth in her own expectations of herself: a growth she imagines Naomi may experience with her. Rather than immortalizing Naomi as an infallible object of her affections, Mennies’ speaker revises her understanding of Naomi through the collection, as though she grows along with the speaker: “What I’m trying to say, Naomi, is you found me at the exact right time.”

The speaker’s journey in exploring her bisexuality, carefully implied in poems dictating her past relationships and partners, is perhaps the clearest example of her growth toward self-actualization. Though, as she says, “Most days, Naomi, you’ll only see fear an inch from my face,” the speaker learns to accept her bisexuality without taught shame. Understanding becomes a sibling to transformation, a lover to adoration. The letters between the speaker and Naomi are presented as gateways into this developing devotion, an exploration the reader is intimately involved in. Almost all of the speaker’s letters to Naomi end with an invitation into adoration: “How do I look away now that I have seen you?” We learn to adore the speaker as she adores Naomi. This adoration becomes its own art: a method for our own self-realization.

Here is my second life, Naomi, Mennies’ speaker says, offering her readers insight into her own actualization as it is charted through desire:

The woman you turned to light, to shadow, and back
(at last!
at last!)
to light––