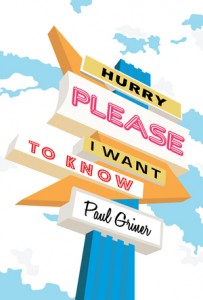 Hurry Please I Want to Know is Paul Griner’s second short story collection, following the release of his third novel, Second Life, in early 2015. This eclectic yet wonderfully coherent collection proves once again Griner’s acute grasp of the complex and slippery emotions leading from gladness to mourning. Throughout, his characters take the reader on rich and elegiac journeys, each of only a few moments’ duration.

The collection consists of twenty-two pieces of varying (but overall short) length. The shortest piece is a 100-word surreal drabble, the longest story—the collection’s best, “On Board the SS Irresponsible”—barely runs over twenty pages. True to its title and epigraph, both borrowed from T. S. Eliot’s Waste Land, the collection is a forceful but self-consciously impotent plea for emotional bulwarks that may help ground contemporary experience. Griner knows that the state and its institutions have ceased to provide meaningful guidance. In “Newbie Was Here,” for instance, a private in the Second Iraq War must risk his life and sacrifice an innocent to follow an irrelevant order.

Relationships appear to be the only other means to live a meaningful life, but Griner suggests that clinging to family or lovers is equally pointless. Unexpected pockets of loneliness and despair syncopate Griner’s characters’ lives, resembling accidental knots or cuts in otherwise predictable strings of trivial events. Although we all inherit our ancestors’ physical and temperamental traits —a theme humorously explored in “Lands and Times” where facial features and habits belonging to a lately deceased grandfather are distributed among surviving family members—the one constant in Griner’s stories is that the pain of loss is inevitable and unfathomably difficult to deal with. This is not to say that the stories, with their deadpan narrators, impossible ethical dilemmas, and often bizarre and dream-like internal laws, do not also manage to be hysterically funny. Griner understands that, at their core, emotions are physiological noise, and he expertly evokes situations in which the reader is invited to indulge in almost medical self-observation before responding to the stories’ absurdities and profundities with the same narrow embodied repertoire—laughter, sadness, confusion—as Griner’s protagonists and narrators.

About half of the pieces, among them the excellent “The Caricaturist’s Daughter,” are surrealist compositions that juxtapose Griner’s smooth and contemporary conversational tone with absurd, magical, or nightmarish plots reminiscent of Murakami or Borges. The stories are disorienting, but never become self-serving or obfuscating. “The Caricaturist’s Daughter,” for instance, tells the story of Bernadette, whose aging and increasingly reckless father must draw her features every morning to replace the “shallow pool” where her face should be. Bernadette’s father causes her pain both at school and at home: he draws her a glazed donut mouth or oversized clown-feet to punish her and allows his marriage (to a made-up wife) to disintegrate amid useless material wealth. Bernadette eventually learns to draw herself and, when the tables are turned, her alcoholic father appears “only in his absence, no matter how many times she sketched him in.” It would be too easy to read the story as a parable about flawed parental interventions or children’s suffering. The surreal world Griner creates is richer, and vastly more corporeal, than allegory.

Griner’s investment in corporeal reactions or materializations allows this collection to stand out. One particularly good surreal story, “Open Season,” follows two word hunters in a world increasingly bereft of complex vocabulary. Words in this story—Kentucky, silicone, lavender, and please—bleed blue ink and smell of childhood memories. The hunters slit their carcasses “from anus to breastbone” and mount them to their living room walls as trophies. One of Griner’s two-pagers, “A Sharp Winter, an Obese Smile,” investigates the physical sensations of being let down by family members, the mother’s anger turning “bigger and bigger, all chest and balls and sulfurous cologne.” In “Hotei,” a woman traumatized by three past miscarriages observes how another miscarrying woman offers food to Buddha, hoping for better luck during future pregnancies. The protagonist eventually offers herself to Buddha, praying for impossible completion through motherhood: “I turn, kneel, lay my wet face against the Buddha’s smooth swollen stomach. It’s in there, I think. What I want, what I need, what will make me whole.” Rarely do words feel so alive, fragrant, and bloody.

The collection’s most memorable stories thematically revolve around experiences of mourning. Griner seems particularly interested in capturing the painful sensation of life carrying on in violent disregard of one’s inability to cope with having lost a loved one. In “Balloon Rides Ten Dollars,” for instance, a recently bereaved woman’s trip in a hot air balloon feels like a doomed ascent to heaven; a mourning husband must physically transform into his dead wife in order to weep in “The Builder’s Errors”; and, in “Mum on the Rock,” a son drinks up the frozen water that used to be his mother, feeling her clairvoyant wisdom flow through his body. “On Board the SS Irresponsible,” perhaps the collection’s most haunting tale, details a divorced father’s perfectly planned outing with his three children, the consequences of an oversight, and the day’s fatal conclusion. In the collection’s final and devastatingly beautiful piece, “Three Hundred Words of Grief,” a woman begins to say goodbye following her mother’s diagnosis of terminal leukemia. In all of these stories, Griner makes clear that loss has no solution: it demands to be faced and it will likely leave permanent traces. Weaving in his personal memories throughout this excellent collection, Griner is well aware that happiness is brittle, a knowledge that simultaneously elevates and burdens our all-too-brief periods of joy—as well as Griner’s stories.