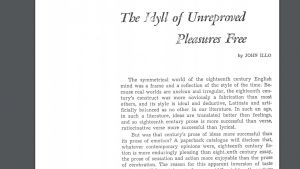 First published in Carolina Quarterly Issue XVII in 1965, John Illo’s “The Idyll of Unreproved Pleasures Free” analyzes the controversial novel Memoirs of a Women of Pleasure (popularly known as Fanny Hill) by John Cleland. Though often cited, particularly in Hahn and Behn’s The Eighteenth Century British Novel and Its Background, Illo’s article can no longer be found in its original publication. Issue XVII was sold out, leaving no remaining hard copies.

Thanks to the efforts of Classics, Dramatic Art, and English/Comparative Literature Librarian, Thomas J. Nixon, a photocopy of the article was found within the Wilson Library Archives at the University of North Carolina at Chapel Hill. For the first time Illo’s article is now available online, finally mending a long-standing gap in academia. Illo’s remarkable analysis of Cleland’s language–described as sometimes “metaphoric and Latinate,” sometimes “literal and Latinate,” sometimes “metaphoric and native,” and sometimes “literal and native”– highlights the rare and unique content of Cleland’s Fanny Hill among Western literature. Ultimately, Illo boldly explores human sexuality and the changing sexuality of cultures through time, leaving readers with an enduring message: “Fanny’s idyll can only show our culture its own incompleteness or overmaturity or sickliness, and her carefree health.”