Home / Review / The Education of a Young Poet: A Review 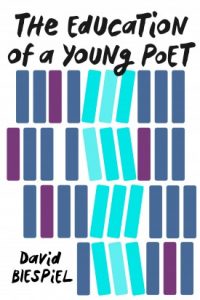 Part memoir, part imaginative recollection, David Biespiel’s Education of a Young Poet (Counterpoint Press, 2017) participates in two major traditions of Western literature. Unlike St. Augustine’s Confessions, Education focuses on a secular, rather than spiritual, journey of the author. In this sense, the self-reflective memoir is closer to the Confessions of Jean-Jacques Rousseau than to St. Augustine’s text. Biespiel’s pilgrimage, from a generational Judaism in his family to a spirituality of poetic art, unfolds mostly during his years as an undergraduate at Boston University. Looking back on his formative years, Biespiel also follows the literary tradition of bildungsroman. The genre of growth and maturation of the protagonist, bildungsroman encompasses works like Johann Wolfgang von Goethe’s Wilhelm Meister’s Apprenticeship, Jane Austen’s Emma, and J. D. Salinger’s The Catcher in the Rye.

Biespiel’s Education develops and realizes the ambition “to see fantasies and memories and dreams and projection in the same way” and to understand existence as “in time and across time.” Biespiel often compares language and writing to undressing: with each removal of clothes, meaning becomes more immediate and tangible. Recalling his first writing experiences after a move to Vermont, Biespiel recognizes that:

The very idea of writing was a physical joy as much as it was a psychic one. It was like discovering another person’s body for the first time, naked and striking and flowing in time. I was hungry for archetypal fantasies as much as sexual ones. My sense of myself as a physical being aware of the cadences and idioms of my body had been a long chain of events that led to my arrival at that [writing] desk.

Each chapter, about 10 pages in length, acts as a journal entry in which the poet’s self-awareness and his discoveries indeed hover “in” and “across time” as they inlay and overlay one another. Biespiel’s language both veils and unveils the writer’s expanding self. The prose veils by bodying forth the sometimes fictional and always creative revaluation of the author’s growth, and unveils by uncovering the mysteries this self-reflective process holds in store.

The memoir unfolds as a series of “spots of time,” to borrow from William Wordsworth. Moments and seasons of heightened consciousness and vivid insight, these spots exist in time and yet, in their significance, spread beyond the visionary moment chained to the chronology of days and years. Indeed, these spots of time serve for Biespiel not only as milestones of the artistic life, but also as a fountain of living energy generating the power to relieve, reflect, and restore the poet’s mind. For instance, with this Wordsworthian lyricism and insight, Biespiel locates in a drive from Montana a visionary portal left ajar for the young author:

The slick highway and static vision from the rain became a new dream of peacefulness, a fragrant entrance into the mist of the soul . . . It’s the way with metaphor too, I would learn. It hides random visible experiences like a dark suit pulled from the back of a closet found to still fit.

Though haunted by Wordsworth—to whom Biespiel turns in “The Pale of Vermont” chapter—Education reveals the broader literary and cultural horizon of the author. “The first poetry I ever knew,” he explains, is the Jewish prayers of his grandfather, Harry Borg, who came from rural Ukraine to America in 1910. Walt Whitman’s “Song of Myself,” so thoroughly about being in and beyond the limits of the body, looms large over Biespiel’s poetic sensibility. His growth includes Robert Frost, as found in A Little Treasury of Modern Poetry, culledfrom his mother’s library, and a fascination with Gerard Manley Hopkins, William Butler Yeats, W. H. Auden, Theodore Roethke, and Stanley Plumly, among others. Biespiel’s wide reading in poetry and prose coexists with his activism in liberal politics: he finds, for instance, the Walter Mondale presidential campaign of 1984 exhilarating. Famous speeches by J. F. Kennedy, Robert F. Kennedy, and Martin Luther King, Jr. saturate his consciousness alongside Aeschylus.

Similarly interwoven, the memoir’s sacred often dwells with the profane. Poetry is like the “unrepeatable finitude of sex,” “mute caresses of the mind,” and the Sh’ma: “‘Hear, O, Israel, the Lord our God, the Lord is One.’” Biespiel recites from Emily Dickinson at a party filled with “cigarette and hash smoke,” with several guests already “collapsed from the euphoria on the floor.” He recalls how, in a moment of hallucination from taking “mushrooms” with his college friends, the particulars of the world and its infinitude “became one.” College friendships and long kitchen conversations shape the poet’s identity and form camaraderie for sharing experiences and testing literary and philosophical ideas. 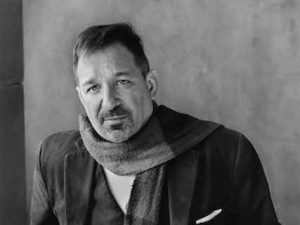 Biespiel’s fascination with proximities and overlaps between companionship and solitude, the lowly and the lofty, the momentary and the momentous, recovers the unevenness of life’s course. Only in retrospect, the memoir suggests, do we glimpse the value and degree of permanence in each moment.

Unsurprisingly then, Biespiel’s high school Latin classes impress on him the Latin cadences of Ovid, Virgil, and Catullus as the unforgettable “rhythms of life.”  Summer-long training as a diver in Nashville during his college years prepares him for “literary life—for training, for discipline, and for patience.” The “rising and diving” of nighthawks Biespiel observes on the roof of his college apartment points to a “being within itself, like metaphor, that collapses or dies when you poke at it too much.” A recurrent childhood dream stimulates his deepening sense of the way poetry captures the bodily and the transcendent:

You can feel the nakedness of your body in moments like that. There’s thrumming around you and behind you. Something unknowable, like the smell of love and death, and plain as the petal of a flower.

Moments like this showcase a larger direction of Biespiel’s artistic thought. Poetry—and so much of the book reads like poetry—is a reaching after the ineffable by the means of language. In the process of this reaching, the inexplicable surfaces and mingles with the palpable and the physical, while this union somehow preserves the ethereality of wonder. The richness of Biespiel’s visionary insights recalls the epiphanies in another literary predecessor, James Joyce’s A Portrait of the Artist as a Young Man. His vivid prose throws into a relief what Virginia Wolfe calls “daily miracles, illuminations,” like “matches struck unexpectedly in the dark.”

As a match newly struck, The Education of a Young Poet recovers a dream-like glow of this world. For Biespiel, poetry is just as ingrained in its thematic subjects—suffering and compassion and democracy and citizenship—as it is invested in the power of the metaphor to reshape such stuff of life. The author’s journey restores our sense of the visionary power of language, to be “afire and itchy and wild-eyed” about the letters of the English alphabet. The letter I, Biespiel writes, a “single, straight scratch on the page,” contains all the “concepts we earnestly apply to that vertical bone.” “[T]he self, individuality, the imagination, the mind, the sensual body” behind this single letter “could topple a government” and renew the poetry of our humanity, in the body and beyond corporeal bounds.