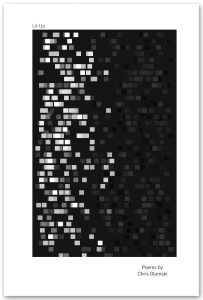 In his new book Lit Up (The Cultural Society, 2017), Chris Glomski shows what lyric poetry looks like in the neoliberal age. When he writes in “Lyric,”

he seems to agree with the French philosopher Gilles Deleuze that society has transitioned from the application of “discipline” to data-based “control” as its governing principle: “control” replaces the old institutional or disciplinary flowcharts and workflows. In place of “environments of enclosure” like prisons, hospitals, factories, schools, families, there now appears a “new monster”: “ultrarapid forms of free-floating control,” which modulates rather than molds its subjects. Control societies don’t limit movement, they track it. Deleuze, along with his friend Felix Guattari, imagines “a city where one would be able to leave one’s apartment, one’s street, one’s neighborhood, thanks to one’s (dividual) electronic card that raises a given barrier; but the card could just as easily be rejected on a given day or between certain hours; what counts is not the barrier but the computer that tracks each person’s position—licit or illicit—and effects a universal modulation.”

Though he was writing in 1990, Deleuze is prescient of the proliferation of mobile apps designed, for example, to automatically re-route users around interstate accidents or time-consuming bottlenecks. In such an environment, space is thought to be open, navigable, smooth, and apparently limitless, but movement itself becomes programmatic: there are an infinity of options or “directions” and all of them are “finite.” According to Glomski, the same is true for interpretive directionality. “Gangs” are “signs,” and vice versa—riotous signifiers suppressed by a “curfew” of “mandatory interpretation.” Furthermore, in “Lyric,” “riots” and gangs are as rationalized or domesticated as so many “lilacs” popping up in the front yard come spring, where even “the little lame hyacinth breaks out / and glows with its weird belief / in upward mobility.” Everything is “oeconomized,” brought back, in the ancient Greek sense of the term, to the management of the private, individual household. So apropos of an Occupy era, Glomski shows how quickly aberrancy and resistance are pruned back, subverted and contained, into banal normalities: “Chaos / when it reigns / is depressingly normal / like putting on galoshes / when the new basement floods / and grabbing / a mop.” As long as they’ve “thought of everything,” as long everything in today’s neoliberal economy is quantized and data-based, the god Chaos, that personification of primordial matter from whom sprang the light of creation and difference, emptiness as well as plenitude—that ancient god stays neutered of his potency and power.

Here Glomski’s wit conceals an underlying anxiety—a fear of loss of depth and breadth, of space and its creative possibilities. Indeed, the smooth space of control society is impenetrably flat. Glomski registers what it’s like to write poetry with no foreground or background, only surfaces—what it’s like

In place of depth-perception, there is a remediation of surfaces. In place of contour there is collage and overwrite. All objects and events occur along the same ontological plateau.

Ontological flattening has a disorienting, polysemic effect on the reader and writer of the lyric in the neoliberal age. The slipperiness of experience chutes consciousness always back into the present. Even basic seasonal details can only be conceptualized with reference to the momentaneous stream of the news cycle and the stock exchange: “Until the leaves / turn October is mostly subprime.” Indeed, it becomes “Impossible / not to be enticed by the short life / of everything.” Limitless surfaces oblige the mind to hydroplane in shallows. In the midst of this velocity, while reading Lit Up the image that hung in my mind was one of New York-based artist Dan Witz’s murky mosh-pit paintings, called “Agnostic Front” (2014). All faced toward a black backdrop, Witz’s photorealistic riot of muscled, shaven white male bodies in monotone hardcore tees and chiaroscuro moshing against each other at a crossover thrash metal concert recalls Peter Paul Rubens’ baroque masterpiece “Massacre of the Innocents” (1612). Both paintings depict a brawl of densely packed bodies, but Rubens interprets biblical lore, while Witz enshrines a night out on the New York punk scene. The violent apotheosis of the crowd is no longer a product of myth and fabulation but rather of a nightly subcultural ritual. Narrative context no longer concerns the coming of the Messiah, but the relatively controlled and public staging of masculine anxiety. I think of “Agnostic Front” while reading Glomski’s poems because of the hyperrealistic flattening that both perform: the contemporary artist or poet does not make recourse to the depth of legend, myth, or history to give body to a formal vision. Instead, a frenetic, overstocked, optional reality offers prefabulated fever dreams for the low “price of entry.” You need look no further than whatever is in front of you.

Over a quarter of the poems in Lit Up are described in their titles as “lyrics.” Yet none of these contain the “lyric ‘I’”. Though the pronoun is present elsewhere, wherever the lyric is invoked as a genre-tag in this collection, an “I” is precisely what gets left out. This is a noteworthy formal choice for a poet who leaves very little out. Indeed, when it does show up, Glomski’s “eye is an opportunist / whose blink frames the world in the shade / of a central time” and his “I” is the network-node for a data-stream of unfiltered immanence:

In Glomski’s anti-“lyrics,” the “I” functions as the tenuous anchor-point for centrifugal motion spiralizing increasingly outwards. Here the “lyric I” is in default crisis-mode, ever on the verge of collapsing under the shocks and tremors of a supersaturated hyperreality: a figure as probably forgettable as “Margie Richter / whose designated smile / in fifth grade stirred / in brief class-changing / moments an epic eyes-hips- / knees-toe-quaking” nevertheless manages to secure a 7.2 on the poet’s inner Richter scale. Always there is “a sense of urgency for / nothing in particular.” The state of Glomski’s speaker—though, perhaps the term “speaker” is a gross reduction for the heteroglossic gauss that squawks across the flickering pages of this book—is one of catastrophic hypersensitization. The absence of punctuation and cascade of immediating caesurae reflect the doings and undoings that here identify the lyric “I,” a pronoun defined by its ceaseless shifting, its reterritorializing, then breaking apart—not quite stable, but never quite altogether denatured.

When Glomski evicts the “I” from his lyrics, he leaves out what leaves out; what provincializes a poem with a single, limited frame of reference. In doing so, he tries to secure for poetry a better strategy for owning up to and negotiating the super-saturation of a media environment that the philosopher Walter Benjamin, in an earlier time, described as contributing to the “inescapably private character of experience.”[1] Glomski is the flâneur for an online epoch—he closes the laptop and exits the apartment of the self for the broad day of the mobilized crowd. Claiming “to saunter is an art,” he competes with poetry’s other famous flâneur, Charles Baudelaire—though Benjamin argues that Baudelaire’s lyric was less an embrace of the urban menagerie as much a defense against it, “lost in this base world, jostled by the crowd.” Baudelaire’s lyric subject was a reaction against the overstimulus of the modern-day agora. Every shock from without is “parried by consciousness” and given the character of “isolated experience.” Experiences are isolated and screened by “a vigilant consciousness” on its way to becoming an “I”. For Glomski, too, “exposure to shock” is the poet’s “norm,” but by disrupting the vigilance of the “I”, stimuli are allowed to “enter long experience,” or what Glomski might describe as “time, the central standard for presence / and absence.” The long experience of time is what ultimately opened Marcel Proust to the taste of a madeleine dipped in lime-blossom tea, whereby “certain contents of the individual past combine in the memory with material from the collective past.” For Glomski, similarly, “a tea-soaked / twinkie brings it all back home.” Where Baudelaire parries the crowd with a resolute and conscious “I,” Glomski’s “I” is resolutely porous to crowdedness, taking it all in in order to mediate both the individual and the collective in the time of the poem, especially the several long poems of Lit Up. Glomski’s anti-Baudelairean flâneurie permits him to collectivize his “I,” and begin to speak with it beyond the meanness of private detail, the data by which I am ultimately known, and modulated, or controlled, accordingly.

As performed by Glomski, a poetic logic offers a potential workaround to the superstructures and superhighways of control society. Surfaces may prevail over depths, but the lyric “I” becomes a transitive wormhole juking across them. The poet internalizes the external world to such an extent as to turn inside out and form a funnel across the barriers of Deleuze and Guattari’s imaginary city, rerouting the data streams into new, unforeseen directions. Just so, Glomski punches out these transdimensional fistulae, causing “the visceral / part of presence   Flowing past / itself” to form where before there was only smoothness. The poet goes outside so as to allow the world to go outside, too—a world otherwise enthralled by the frictionless surfaces of an optional existence.