Home / Review / Tell Me How It Ends: An Essay in Forty Questions: A Review 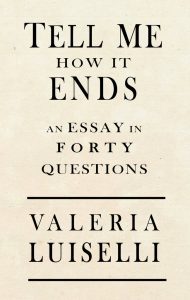 Valeria Luiselli is a Mexican writer whose novels and essays are formally complex and often surreal. In 2015, having recently immigrated to the United States, she learns that her Green Card application process has been unaccountably delayed. Bilingual and with unexpected time on her hands, she begins volunteering as a translator with The Door, a nonprofit that matches immigrant and refugee children with legal assistance and other services. Her latest work of nonfiction, Tell Me How It Ends (Coffee House Press, 2017), emerges from that time spent as a translator.

The subtitle of this slim and devastatingly straightforward volume is “An Essay in Forty Questions.” The questions that structure Luiselli’s book are taken from the intake questionnaire that all “unaccompanied migrant children” must answer in order to determine whether or not they will be eligible for asylum or SIJ (special immigration juvenile) status. Either status might allow them to remain in the United States, offering a path to a green card and, eventually, to citizenship. Wading into this bureaucratic process, Tell Me How It Ends chronicles one small part of the child migrant crisis that began in 2014, when waves of juvenile refugees arrived at the U.S.-Mexico border, fleeing gang violence in Central America.

As a translator, it’s Luiselli’s job to help the children—often no more than five or six years old—through the forty-question intake form, to shape their answers into a story that will (hopefully) be traumatic enough to convince an immigration judge of their right to remain. The questions are dry and often confusing to the children. In one instance, Luiselli describes how difficult it is to get two young Guatemalan sisters to understand the question “Did you stay in touch with your parents?” The stakes of these interviews can turn a translator or lawyer ghoulish: the more horrific the story, the better the chances of immigration relief. “In the warped world of immigration,” Luiselli writes, “a correct answer is when, for example, a girl reveals that her father is an alcoholic who physically or sexually abused her, or when a boy reports that he received death threats or that he was beaten repeatedly by several gang members.” Of the girls who struggled to understand the concept of “staying in touch,” for example, Luiselli admits, “The girl’s answers weren’t really working.” They have come to the United States, not out of fear or danger but because their mother, who had already migrated, finally saved enough money to bring them. Ironically, it’s the relative simplicity of this story that will likely make for an unhappy ending: a mother, who misses her daughters, pays a coyote (the term for the guides who escort migrants to the border) to bring them to her.

Luiselli’s so-called essay is more than a memoir; it’s more than a report on an emergency, though it fulfills that role ably as well. In attempting to thread its way through the incoherence of both the refugee children’s traumatic journeys and the U.S. immigration system as a whole, Tell Me How It Ends reveals, ultimately, the burdens of narrative coherence. Throughout, Luiselli wrestles with her responsibility as not only a translator but also, through re-phrasing, re-organizing, emphasizing some answers and de-emphasizing others, as the co-author of a story that, unconvincingly told, might literally lead to her young interviewees’ death.

In many of Luiselli’s previous works, both fictional and non-, she is playful with structure. Both the 2013 essay collection Sidewalks and 2011 novel Faces in the Crowd shape themselves around the psychic geographies of cities. Luiselli composed her 2013 novel, The Story of My Teeth, in consultation with the workers at a Jumex juice factory in Mexico City; the novel twists and turns according to the variable desires of the workers who hear each installment as the narrative builds. She understands, as well as any writer working today, how to play with structure, how to use it to make the quotidian strange and marvelous.

The same concern with structure is evident in Tell Me How It Ends, although here Luiselli is not playful, but rigorous. She guides the reader through the text by echoing and responding to the forty questions of the immigration form, sometimes weaving them organically into the text and other times addressing them directly to the reader. Repetition also provides structure to the unfamiliar and arcane. She returns to the same figures, the same spaces, keeping the book tightly located within the courtroom and the classroom where she teaches a Spanish language conversation class in which conversations keep circling back to the immigration crisis. The tightly controlled structure of the book seems an effort to shape the brutal incoherence of contemporary immigration policy into a narrative with some kind of natural—too say nothing of happy—ending. 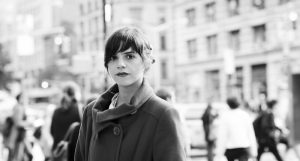 In addition to the forty questions, Luiselli divides her book into four sections: Border, Court, Home, and Community. The titles of these divisions bear thematically on their contents but take on greater meaning when it dawns, at the beginning of the Court section, that they are drawn from a list compiled “to help children recall the phases of their journey during the interview.” Luiselli notes, wryly, “in some way, we understood that the words scribbled on the board were also a kind of scaffolding holding all of those broken stories together.” As an interpreter and volunteer, she recognizes the importance of that scaffold, of creating a narrative that is both coherent and convincing enough for an overworked immigration judge.

But Luiselli is also an author and a parent, two identities that are also keenly attuned to the power of a narrative arc, a tidy ending. She shares the journeys of the children that she interviews with her own daughter; her daughter is unsatisfied with the story that Luiselli gives her. “Tell me how it ends,” she addresses her mother, providing the book’s common refrain. For Luiselli, “it” ends in a courtroom, where the legal right of these children to remain with their families will be determined by whether Luiselli has made a convincing enough story, whether her interviewees have answered enough questions “correctly.”

But for the kids in immigration court, the story doesn’t end there. Even if they are allowed to stay, the gangs that many of them fled, MS-13 and Barrio 18, were started in the United States, a response to the wave of immigration that followed U.S. interference in Central America in the 1980s. One of the children whose story Luiselli follows more closely is Manu, a sixteen year old Honduran whose aunt demands that he flee the country after making a police report against a group of Barrio 18 who killed his friend. He is allowed to stay in the country under an SIJ visa—a rare triumph. The last section of Tell Me How It Ends, “Community,” concludes with a picture of him practicing flips in his new back yard. He is, Luiselli tells us, “learning to fly.” But she can’t offer the reader even the hollow reassurance that Manu is safe now. Hempsted High School, Manu tells her in an interview, has chapters of both MS-13 and Barrio 18. “I go cold at hearing this statement,” Luiselli reports, “which he delivers in the tone one might use to talk about items in a supermarket.” Children who fled gang violence in their home countries find the violence difficult to escape in their new country of residence; worse still is the normalization of that violence that they might never leave behind.

As a fiction writer, Luiselli knows the pleasure that can come from subverting expectations, from stymying the expected ending. Within Tell Me How It Ends, however, both coherence and incoherence do violence to the lives whose traumas do not fit neatly within a court-mandated interview. The title turns her daughter’s interrogative back on the reader: tell me how it ends. We can only answer, along with Luiselli, “I don’t know.”

In the weeks that I have been drafting this review, the White House has released an article on its website titled “What You Need to Know About the Violent Animals of MS-13.” Those of us who, like Luiselli, are attuned to both history and the rhythm of stories know what can happen after human beings are called animals. And lest we think that this disregard for human being is restricted only to the “violent,” at the border, ICE has been systematically separating refugee children from their parents. The honest-to-God Attorney General of the United States seems to think that this kind of treatment has Biblical justification. The same verse he cites—Romans 13—was once used to justify American chattel slavery.

Elsewhere in the United States, the ORR, Office of Refugee Resettlement, has “lost”—or at least lost track of—approximately 1,500 refugee children who had been placed with a family member or other caregiver in the United States. Responses to this colossal failure of bureaucracy have been awash in fears of child abuse and trafficking. I, too, am afraid. Then I remember the description of the “icebox” that some of Luiselli’s interviewees report having been held in; I read on Twitter that ORR can keep refugee children in these holding centers indefinitely. I sometimes hope that these kids are never tracked down, that the U.S. government isn’t given more and more ways to keep tabs on them, funnel their information to ICE, separate them once more from their families and deport them whence they came.

“The world,” Luiselli writes in her own Afterword, in 2017, “is so upside fucking down.”