Home / Review / The Science of Lost Futures: A Review 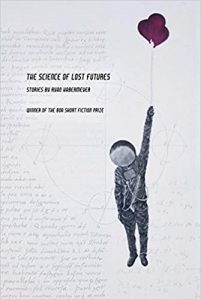 Ryan Habermeyer makes beautiful promises of inventive tales drenched in the bizarre and unsettling. Each tale in his new collection, The Science of Lost Futures, explores a gruesome conceit that is wholly decadent. Scattering tokens from medieval and early modern superstitions surrounding medicine, alchemy, and rituals that profane the sacred—like the line, “A rose petal transfigured from the corpse of Catherine of Siena, and a vial of breast milk from Saint Agatha” (205)—Habermeyer’s fiction greedily explores the human body and happily tests its boundaries. Indeed, bodily boundaries are continually transgressed by ever-present rumination on birthing and parenting. Habermeyer’s stories wonder what making another human requires, what sacrifices the process demands, and what, if anything—or anyone—really survives the whole ordeal. The half-answers provided throughout this volume gesture to the pains of mating, gestating, loving, hoping, and rearing.

Throughout, Habermeyer asks what to do with the (often bloody) physical manifestation of the other that originates in the familiar. Sometimes comically macabre in description, severed appendages function as thematic connective tissue among stories that ruminate on the mysteries of courtship, marriage, parenthood, as well as various forms of connectedness ranging from friendship to civic duty. In “The Foot” an oversized, dismembered foot washes ashore and galvanizes a seaside town as overprotective, makeshift capitalists foment gossip about the inexplicable visitor and sell tickets to see it. “Visitation” follows a collapsed and oddly sentient womb as it scuttles around an astounded couple’s home. It is a hungry, sniffling, soggy entity recalling the mysterious intelligence of a cephalopod crossed with the fickleness of a cat. Severed thumbs act as signifiers of patriotism in a farcical satire of government elections and inane bureaucratic definitions of personhood in “What the Body Does When It Doesn’t Know What Else to Do.” And “Frustrations of a Coyote” teaches us that a “constellation” (59) corpse (bits and pieces of body sprinkled about) is what you get when you cross a deranged buddy comedy with a man-versus-wild arms race against hungry coyotes.

As a winner of the BOA Short Fiction Prize, The Science of Lost Futures is a lively exploration of human folly and frailty in the vein of Karen Russell. Habermeyer joins Russell in playful fantasy giddily veering into dread. But where her 2013 short story collection, Vampires in the Lemon Groves, features pieces like “Reeling for the Empire” and “Proving Up” that are haunting and achingly beautiful, Habermeyer stalls with throat-clearing: his stories provide captivating glimmers but cannot sustain his vision. Even Russell’s slightly more skittering “The Bog Girl,” featured in the June 20, 2016 issue of The New Yorker, which Habermeyer seems to echo in “The Foot,” raises the stakes of accommodating a bizarre, out-of-place entity with a more enduring pathos than is mustered in The Science of Lost Futures.

The Science of Lost Futures contains some truly enjoyable surprise moments of eerie fantasy, and each story does offer a fun, pocket dimension of the weird. Unfortunately, each story’s wry commentary—whether effected through hyperbole, absurdism, or satire—revisits the same types of flawed humans: clueless dudes and their shrewish babes. Each couple described is a replay of the last, and they are all selfish in nearly the same ways, weak-willed and grating. Children that appear are brats by definition. Habermeyer also fails to develop his characters that have mental illnesses as he lapses into caricature.

Other missed opportunities include Habermeyer’s answer to an always pertinent question: what might a disembodied, roving uterus want to eat? I’m here for a Raymond Carver-esque broken love story with a fabulist twist wherein the Galenic notion of the wandering womb is literalized. This is a brilliant set-up. However, in “Visitation,” the answer to the question is, disappointingly, “used tampons, condoms, [and] anti-birthing ointments” (44). On the one hand, this is just the limited imagination of our insipid characters. On the other hand, it is a punchline that flubs the perfect alley-oop of a ravenous uterus. In the development of our potentially vicious anti-heroine, we do get boons like: “As a substitute teacher she confiscated the necklaces from all the girls in the German club and wore them every night hoping to dream their dreams” (43). The line allows the reader to imagine that the character inhabits a rich, twisted internal make-believe world; but the characterization of this woman as quirkily wicked is not sustained in the story. Instead, there is a limp worry that her prolapsed uterus ad absurdum is punishment for her bygone half-crimes accompanied by a portrait of nervous energy.

The drama of who these individuals might be—bratty children or uteruses—ends before it begins, however, and we’re left with tired shells of dysfunctional relationships plucked from a Lifetime movie. The problem with slapping the magnificently grotesque onto the mundane is that the mundane remains painfully boring. To get magic, it’s necessary to reveal the everyday as equally grotesque and magnificent. The couple contending with a renegade uterus in “Visitation” is stupid in the most dapper-British-man-feeling-put-out sense of the word: they are dull, uninspired clods. I don’t care about them or their pain. However, the ending of this story is sick and perfect. Read it for that. 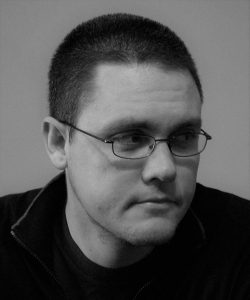 Habermeyer’s stories ultimately function as so many exercises in failed empathy. At best, such blindness is deftly sewn into the relationships between the characters; at worst, the author fails his readers via sloppy lampoon. In “Everything You Wanted to Know About Astrophysics but Were Too Afraid to Ask,” a woman collapses under the weight of everyone else’s problems: “she was a bottomless pit for all of their venting, for all their secrets” (69). In the end, she is flattened into slur-as-synecdoche for all women: a black hole. She is only her genitals—made celestial, cosmic (and comic)—into which her partner, “wedge[s] a few fingers…so it does not have to feel lonely” (73). Now simply an “it,” she is nonetheless not all that different than before her transformation.

Read generously, the bad end for our black hole (and so many characters in the collection) is the joke—a joke—on those who cannot see one another’s humanness. Read with increasingly little patience, however, The Science of Lost Futures suffers from lack of a pay-off. Without growth or room to invest in characters’ experiences, readers are left with a tableau of oddities. If these stories are indeed intended as crystalline vignettes only, then the collection’s aesthetic doesn’t go far enough. Rather, these stories might benefit from a Lynchian immersion into violence as art object or a more self-conscious preference for form over commentary on the human condition.

The muddled delivery might be due to a misanthropic ethos voiced in yet another story about harpy-women and the idiot man at whom they love to screech. In “The Fertile Yellow,” our narrator claims: “Nobody changes. Nobody evolves. We are tiny little molecules swimming in a vast cosmos, bumping into each other, shedding energy, gaining entropy, trying to replicate our own misfortune” (137). The text aches to wax philosophic while it pushes against any notion of development (a resistance to progress felt by its characters as well as its readers, it turns out). The effect is one part enjoyable license to ponder and two parts frustration for giving the work so much credit when the next story offers readers more or less the same scenario.

Finally, the tagline for this book might have been: “men are idiots; women are animals.” The collection seems to be wagering a bet as to which of these two fates is more entertaining. In “St. Abelard’s Zoo for Endangered Species,” a husband cannot convince others that he is “anything other than a damn fool” (113), while his wife’s plea of, “‘I’m a person’” (102) fails to convince others that she is anything but a snow leopard. The story “Ellie’s Brood” gives us one-liners like, “his first real animal friend was a woman he managed to get pregnant” (78). Lines like this may have a certain humor for some, but they are insufferable when read alongside, say, the make-up of the Supreme Court of the United States. Lastly, “A Cosmonaut’s Guide to Microgravitic Reproduction,” which opens the collection, reads like it is trying to be a story out of Bradbury’s Martian Chronicles or a Vonnegut misadventure, with a twist of Ken Kesey’s One Flew Over the Cuckoo’s Nest. But it misses the brain, heart, and humor of all three. If this collection had been written in the postmodern moment that birthed Pynchon’s Crying of Lot 49, its cavalier flirtation with dubious consent might be more easily blinked at. The obvious buffoonery of the flawed narrator does not justify a reading-with-the-grain sort of cringe. Instead, what should be a tongue-and-cheek display of spaceship paranoia is an uncomfortable, grating misstep that affronts and disappoints.

Worth a read, however, is the collection’s final tale, “Neophyte.” This last is a foreboding delight. Here Habermeyer takes a bit more time. He skillfully stitches a fascination with fabled torture apparatuses from the Middle Ages into quiet threats to childhood a la Stephen King’s emphasis on the ghostly and perverse. If only this deft and patient development characterized the rest of the offerings in the collection.