Home / Review / Drowning and Burning for Art: A Review of The Deeper the Water the Uglier the Fish 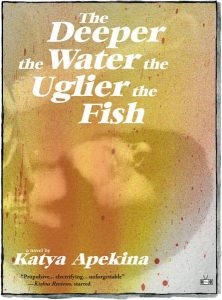 Two teenage sisters, Edith and Mae, leave Louisiana to live with their estranged father, Dennis, a former civil rights activist and successful novelist, whose home is in Manhattan. But this is no summer vacation. Their school year and lives have been disrupted by an attempt at suicide made by their mother, Marianne, who is now recovering in a psychiatric hospital. Lying on bunkbeds in a cramped Manhattan apartment, Edith, who at sixteen hovers on the edge of adulthood, does not trust her father and dreams of returning south to her mother, while fourteen-year-old Mae is ecstatic for having escaped smother mother and wants nothing more than to know her father.

What could possibly go wrong? Katya Apekina’s The Deeper the Water the Uglier the Fish unfurls in a cascade of stories told in a variety of voices and perspectives that inform this transitional moment in the life of a family. The shifting sands of Apekina’s approach chronicle her tale in a compelling and entertaining way, while holding the reader in suspense, largely unsure of the reliability of the various narrators.

No matter: the reader soon learns that Mae eerily resembles her mother, Edith her father, while Dennis, a sexual magnet for women, is finding it difficult to complete a new novel. Unlike her former husband, Marianne, a poet, never thrived as a writer nor, apparently, as a woman. She appears stagnant in her daughters’ memories, which contain no memories of a new man, new friend, or new interests since her husband left.

This former marriage, the unlikely love story of Marianne and Dennis, underpins the forward-moving action of the novel. The two met when he was a college student and she a pre-pubescent child still living in her father’s Louisiana home. A college-aged Freedom Rider from New York City, Dennis and his comrades had been brutally beaten by the cops and then rescued by Marianne’s father. A painter and former medic, her father bailed out the Freedom Riders, patched them up, and provided them a place, his own home, to recuperate.

As described by Dennis in a journal entry, Marianne’s innocence distracted him from his pain during his days of recovery. Later, Marianne’s playful letters to Dennis make it clear that he has continued to contact her after leaving her father’s house and returning to his studies at Columbia University. The way his sister, one of Apekina’s many minor characters, sees it, Dennis immediately fell in love with the child and then waited for her to be his wife: “Not in a perverted way, but he just knew.”

But a letter from Marianne’s father laying out his dying request for Dennis to stop pursuing his daughter dispels any notions of kindly respect on the part of Dennis. The perversion of his interest ultimately ventured beyond the sexual into the artistic. Sacrificing herself in ways suspected but unknown by her daughters, Marianne served as muse for Dennis while he wrote the novel that won him fame and reputation. One can’t help but recall Zelda Fitzgerald and her plangent observation that “plagiarism begins at home.” 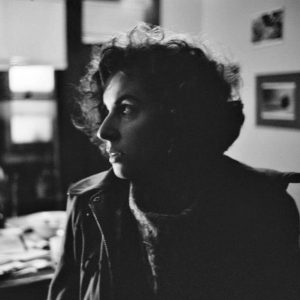 The power dynamics of this relationship resonate with the current #metoo movement and also structure the novel’s resuscitated father-daughter relationships. This original love story changes the complexion of Dennis’ efforts to welcome home his unfamiliar and now grown daughters, though separate tales told by assorted friends and lovers illuminate other aspects of Dennis’ character. A college friend, for instance, recalls the fury he felt when learning how he’d been portrayed in Dennis’ first novel and notes how this moment marked and changed their previously close friendship. Yet in an interview Dennis says that all his fictional characters are himself, all their negative features his own. Once a victor, Dennis is a silent and collapsed figure by novel’s end, like a man spied through a storefront window writing inside a squalid cafe.

Meanwhile, the daughters’ young lives are unspooling within this rich background of their parents’ strange history. From the start, the sisters have opposite ideas about this unusual sojourn with their father in New York. Edith, disturbed by her father’s life and the city itself, wants to return home to a rested, no longer depressed mother, a woman ready to resume her role within their family. Mae, relieved to be beyond her mother’s grip, wants to remain with her father on a permanent vacation from school and real life. Each of the sisters sees the flaws of both mother and father, yet they pull in opposite directions. While at the start of the story, they are children who lack agency to change their lives, by novel’s end, though they have barely aged, they act as adults unwilling to remain powerless pawns of either parent. To say more about the daughters’ choices and the resulting consequences would undermine Apekina’s effort.

The imagery of the novel is fresh, while relying on fundamental metaphors of fire and water. Shaping the narrative from the verbal fragments, scraps and shards of her many characters, Apekina presents a fascinating drama while exploring what it means to be an artist and what it means to be a muse within the framework of family. The novel’s ending is sublime.