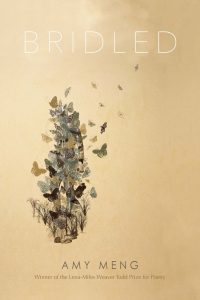 The flashbulb of an old-fashioned film camera throws light on the subject in the split second before the shutter opens, making the details of the scene visible. When the shutter opens, light strikes the film, pressing the scene into the translucent rectangle. The resulting photograph shows the composition of light as manipulated by the bulb.

Bridled, Amy Meng’s debut collection of poetry, works this way. Her words are like a flashbulb throwing light on an ending relationship, illuminating its angles and contours, at the moment before the man leaves. These poems are her film, impressed with images of a love lost.

The speaker of Bridled is a woman, perhaps Meng herself. The poet’s official biography — graduate of Rutgers University and Brooklyn resident with poetry published in Narrative Magazine and the New England Review — offers no clues. But her poem structure may give her away because it reflects the way memory works. The lines are brief, often no longer in print than a pinky finger. They tend to lack a narrative thread and stack upon each other with the randomness of thoughts. No lines rhyme, the imagery is scattershot — whatever happened to fill the frame. The collection as a whole suggests an eyewitness giving evidence.

The woman, governed by her memories like a horse with a bit and bridle, speaks mostly in the present tense. Sometimes she’s reporting on a moment unfolding in real time. In “Motion, Moved,” the speaker relates, “I fold into the cold croissant of bed,” as her lover suggests that she move out of their shared home. But mostly she is reflecting, rehashing the details of their life together and then her life alone. “We smoked naked at windows / and swallowed oysters / for breakfast, greedy as salt,” she remembers in “Recovery.” Another poem sees her take inventory of her pantry, the grains and blue toilet cleaner, while waiting for the man to come home. In “Summer I Didn’t Have,” she visits Charlie the fish man, who cracks open live clams and tilts them into her mouth.

Meng writes not of daffodils or yellow woods but of workaday urban life, whatever the flashbulb happened to catch: bouquets of parsley, terra cotta pots, rotten tomatoes, diamonds sparkling in a store window. “You never know while it’s happening what will burn in your memory, sacred and profound,” says the writer Shauna Niequist. Meng captures this randomness well through her speaker. Her memories are not cinematic moments with soundtracks and a sunset. Many of them are unromantic and strange — molding avocados, a ring around the tub she can’t scrub out.

But Bridled is not really about these mundane, meaningful details. Rather, the collection is about the one who noticed them, who lived and breathed and had her being among them. The speaker herself is revealed through these poems, in the fullness of her feelings and fears and impulses, in the state of her heart, at which a photograph can only hint. At times she is indignant. The first line of “He Tells Me: Come Back When You’ve Pried Yourself Open” reads, “Of course I won’t.” Sometimes she is tender, admitting, “I loved him most when he was all child.” Others she is pained. “The last time we touched / was an accident in sleep,” she says in “Motion, Moved.” The speaker has no grand illusions about this love and this man. Still, she longs for him. This is Meng’s greatest achievement in Bridled: describing the tugs between longing for and loathing an ended relationship in an original, believable way. 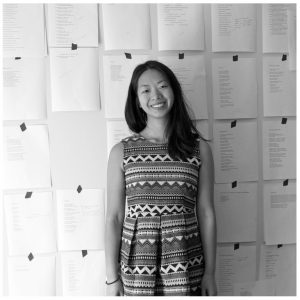 Not all of the poems are about this relationship. In “Selection From the Catalogue of Gazes,” the speaker describes the many spaces where she attracts unwelcome stares: airport security, at a friend’s wedding, on the train platform, and at the convenience store by the dog food. “Penelope,” an allusion to Homer’s Odyssey, does not include the speaker at all but another woman finding her worth apart from a man.

But Meng’s best poems center on her speaker, who grows up through these pages:

As a girl a specific myth

lodged in my ear and grew:

a woman finds her true self

only at the end of love.

The flash captures a woman more fully formed, even as she stands in the frame alone.