Home / Review / The Fugitivities: A Review

Jesse McCarthy’s debut novel The Fugitivities asks the weighty and perhaps unanswerable question: what does it mean to be Black? Is it a static form of identity which one carries across countries? Or is it a form of self that transmutes, grows, and changes across time and space? McCarthy is a literature professor at Harvard, and this, his debut novel, was published almost simultaneously with an essay collection entitled Who Will Pay Reparations on My Soul? The essays, too, examine Blackness: what that means, and the responsibilities carried therein; there subjects, too, are at the forefront of The Fugitivities.

Though the protagonist, Jonah, is an adult man, the novel often reads like a bildungsroman, plotting Jonah’s self-actualization. At the beginning of the novel, Jonah is a new public-school teacher in New York City who, along with his roommate Isaac, tries to reconcile the futility and the responsibility inherent to their shared profession. Both Black and both navigating the wilds of the public school system, Jonah and Isaac have much in common despite the fact that they hail from different countries. Jonah was born and raised in Paris while Isaac is from Richmond, Virginia. Their sense of otherness in New York connects them, but Jonah’s “ambiguous but affluent upbringing” is also a constant, unsettling presence in their shared space. However, as “their trajectories converged once they graduated with their degrees,” these differences ceased to matter; they were each viewed by the white world simply as Black men, and they each carried with them the need to “give back” to Black youth.

Jonah finds his new profession to be overwhelming and disheartening; he fears “becoming attached to a student who might lose their life, or spend years in prison, or who might never leave these same blocks that formed everything they knew.” So, when his friend Octavio hatches a plan to head south at the same time that Jonah is bequeathed a small sum of money from a dead uncle, he abandons both his job and his roommate and heads for Brazil. However, a chance encounter with retired NBA star Nathaniel Archimbald causes Jonah to question his choice to leave the U.S. behind: Where is his place in the world? What responsibility does he carry for his community? Nathaniel tells him, “You have to take responsibility for our people! If the ones like you that have it all won’t do it, then no one will. Can’t you see that?” Jonah responds, “But I don’t want to! I don’t want to do any of that! I don’t want to be responsible, I just want to live my life!” Despite Jonah’s resistance to Nathaniel’s words, they nevertheless take root in his mind; his conscience, in Nathaniel’s voice, urges him not to “run away,” even as he moves through new countries, navigating shifting geo-political landscapes so different from his own. 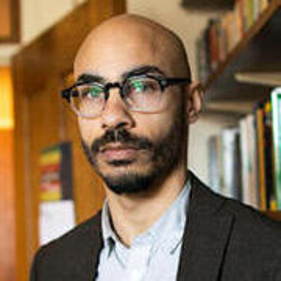 Jonah’s moral quandary is also the novel’s; and McCarthy urges the reader to question, too, where one’s communal responsibility begins and ends. Is there an extra weight that Blackness carries and how far does that extend? Jonah craves anonymity, invisibility, and thus he heads for a part of the world where he will be one among many Black and Brown faces. Anonymous. Free: “It was the first time, he realized, that he was somewhere nobody would find his complexion remarkable.” However, Jonah does not find the freedom he craves; the weight of his parting conversation with Nathaniel is with him throughout his journey.

Ultimately, Jonah is searching for hope and purpose and he finds it in moments, but it is fleeting. When he meets a woman named Teresa in Brazil, she tells Jonah of her walk with God, and she asks him, “Are you walking with God too?” Jonah is decidedly not, but he seems to find hope and momentary faith in the work that Teresa does with impoverished children, gratefully, joyfully. He feels “keenly how much better it would be to walk, as Teresa did, with a deity one believed would deliver.” Instead, Jonah spends most of the novel in a kind of existential crisis that is never really resolved.

This lack of resolution for Jonah becomes a lack of resolution for the reader. The novel ends on somewhat of a cliffhanger, but in terms of plot and in terms of theme. The question that is never answered, either for Jonah or for the reader, is an unsolvable, meaning-of-life query. Given the tone of the novel, and the realities of life, this lack of resolution is, in fact, effective in forwarding the novel’s purpose, which is to explore the question of “responsibility” and how young people, particularly young Black men, grapple with this concept. Clearly Jonah has the desire to “give back:” this is why he became a teacher in the first place, and how he connected with both Isaac and Nathaniel. However, he is portrayed as still needing to come to terms with his own relative privilege—particularly in comparison to the novel’s women—which he sometimes exploits along his journey for self-discovery. This is not a novel that would be well-served with a tidy ending; the conclusion, or lack thereof, is indicative of the messiness of life, and demonstrates both narratively and structurally that these big existential questions that tend to present themselves in youth are the questions that we all must simply learn to live with.